Since swapping my iPhone in for an Android phone, I’ve found myself playing catchup on much of the Android culture. I’ll save my comparisons of the two general platforms for another post, but the obvious and plentiful differences got me wondering just how many Americans use an iOS device versus Android. It turns out that this question is more complex than I had anticipated.

There are a number of reports available that summarize mobile-related statistics throughout 2013. The reports I reviewed came from Pew and Comscore and each looked at a little different aspect of mobile ownership/adoption/saturation. It’s hard to throw a stone and not hit some sort of online commentary on which platform has more users, or how many people own smart phones. What I didn’t consider is while it is somewhat straightforward to collect data on how many people are using smart phones, it is harder to track platform adoption. The two big contenders are iOS and Android, but it turns out there are a number of devices that don’t connect to data networks (only wifi) and some of those don’t connect directly to networks at all. All of this really drove home the importance of understanding the scope of reports summarizing mobile data. It is easy to cherry-pick findings (as with many types of reports). 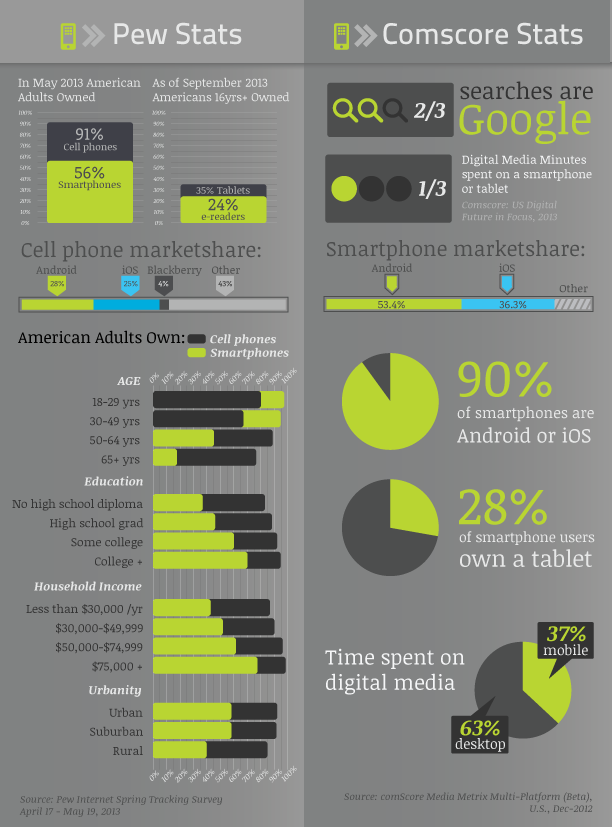